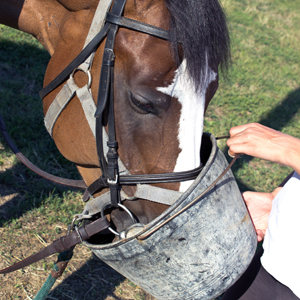 Although the equine digestive tract is exquisitely sensitive, it is surprisingly adaptable to sudden changes in diet, according to new evidence gathered by New Zealand researchers.

“It is widely accepted that the microorganisms that inhabit the equine hindgut are sensitive to changes in the gastrointestinal environment. Microorganisms can change based on the diet offered and how quickly feedstuffs pass through the intestinal tract. It is also known that abrupt changes in diet, especially the starches and water-soluble carbohydrates, can lead to hindgut acidosis, colic, and laminitis,” says Bryan M. Waldridge, D.V.M., a veterinarian for Kentucky Equine Research.

Gaining a better understanding of what bacterial populations exist in the equine hindgut when fed certain diets and how those populations are altered following changes in their diets is important for maximizing equine gastrointestinal health and avoiding colic and laminitis.

As such, Fernandes and coworkers* fed six yearling Thoroughbred fillies an ensiled conserved forage-based diet and another six yearlings pasture only for three weeks. At that point, fecal samples were collected and the population of microorganisms was analyzed. Immediately after, the yearlings fed ensiled forage were abruptly transitioned to pasture for three weeks, during which fecal microbe populations were analyzed every four days.

The study authors concluded that the fecal bacterial community of yearlings is rich in various kinds of bacteria, protozoa, and microbes, and that the relative amounts of those microbes can change rapidly in response to changes in diet.

They also noted, “It is possible that daily changes in pasture composition affect the fecal microbiota of horses and this requires further investigation.”