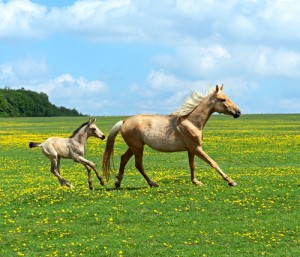 Dehydration, overconsumption of dietary carbohydrates, and abrupt changes in feed or hay type are known to increase the risk of colic in horses. For broodmares, another high-risk time for colic is the period of several hours or days directly following delivery of a foal. Postpartum colic cases have been attributed to the decompression and movement of the mare’s internal organs or an inflammatory response to the stress of foaling, but an absolute cause has not been identified.

Research results published in Equine Veterinary Journal have indicated that some postpartum mares experience a significant shift in the makeup of the bacterial colony in the hindgut. In the study, fecal samples from 221 broodmares were collected two weeks before each mare’s due date and then on days 4, 14, and 28 after foaling. Types and levels of bacteria were recorded and changes were noted for mares that did or did not experience colic after delivering their foals.

Most mares (about 89%) did not experience colic, and for those mares, there was very little change in numbers or types of hindgut bacteria after foaling. In the 24 mares that developed colic, researchers found significant changes in gut bacteria. These changes were evident as long as several days before external signs of colic became obvious. In general, mares in the colic group had much lower levels of microbes in the Clostridia order, bacteria that are usually found in horses.

The research did not provide complete answers to the question of colic in postpartum mares, but it pointed out that a way could be developed to identify at-risk mares and work to balance their hindgut microbes either before or after foaling so as to minimize the chance of colic.