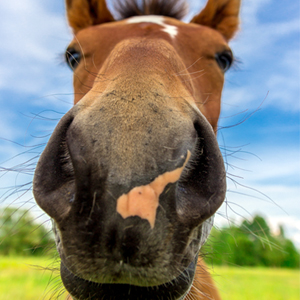 Nasal strips—adhesive spring-loaded patches worn across the nose to help in keeping the air passages open—are effective in reducing the breathing effort in some horses. Because equine anatomy prevents horses from taking in air through their mouths, they are equipped with nostrils that can flare widely during exercise. Horses with average-sized nasal passages get plenty of air without the use of nasal strips when they are performing light to moderate exercise. However, when horses are asked to perform at the highest levels of exercise, such as in a race, having the airway held open allows the horse to expend less effort to breathe. In a study conducted at Kentucky Equine Research, horses wearing nasal strips had less pulmonary hemorrhage than control horses performing the same strenuous exercise.

Human runners don’t get the same reduction in breathing effort by wearing nasal strips. This is most likely due to the fact that at or before reaching about 35% of maximal breathing effort, humans begin to breathe through their mouths as well as their noses, an option that horses don’t have. This change greatly increases the amount of air that can be taken in during one inhalation and reduces the effort required to fill the lungs. Nasal strips probably don’t hinder human runners, but neither do they enhance physical performance.