By University of Florida Extension 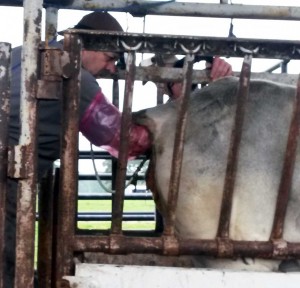 Generally, beef herd pregnancy rates after a 60–120-day breeding season tend to range from 80 to 94 percent. Pregnancy diagnosis identifies the 6–20 percent of open cows in the herd so they can be culled after their calves at side are weaned, instead of waiting to the end of the subsequent calving season. Considering that the annual feed/forage costs associated with maintaining a mature cow can be as high as $400 to $600 per year, culling open cows can save as much as $250 per head that can be diverted to the purchase or development of replacement females, sire selection, increased nutritional management, and other management-related costs. Pregnancy diagnosis can be performed simply at the time that producers work their cattle during their vaccination schedule or even at the time of weaning. There are three practical methods that can be utilized for pregnancy diagnosis in beef herds: 1) rectal palpation, 2) transrectal ultrasonography, or 3) use of a blood sample that is submitted to a laboratory for analysis and results returned to the producer within a few days.

Transrectal ultrasonography, more commonly called ultrasound, can be used to detect pregnancy as early as 26 days of gestation for heifers and 28 days of gestation for cows, with a high degree of accuracy. For a skilled technician, the procedure is as fast as rectal palpation and may provide additional information in terms of embryo/fetus viability, incidence of twins, and potentially the sex of the fetus (usually performed around day 55 of gestation). Prior to the development of ultrasound for pregnancy diagnosis in cattle, technicians were unable to accurately determine the viability or number of embryos or fetuses. Because the heartbeat of a fetus can be detected at approximately 22 days of age, one can accurately assess whether or not the pregnancy is viable. Producers also should be aware that early embryonic loss is a natural occurrence in cattle and may be evident between the time of pregnancy diagnosis and calving, and that this is not the result of the actual pregnancy diagnosis procedure. For example, we have observed about a 4.2 percent incidence of embryonic loss in beef heifers initially ultrasounded at day 30 of gestation and subsequently palpated rectally between day 60 and day 90 after insemination. In beef cows embryonic loss ranges from 3 to 8 percent from 30 to 75 days of gestation, whereas in dairy cattle, pregnancy loss from 28 to 56 days after artificial insemination was 13.5 percent. Therefore, ultrasonography provides a tool to accurately differentiate between the failure of a female to conceive and the incidence of embryonic mortality, because a heartbeat is detectable at 22 days of gestation.

The blood tests are greater than 99 percent accurate if the result is negative or not pregnant, with less than 1 percent showing false-open (false-negative). The false-pregnant (false-positive) rate for the test is approximately 5 percent. In practice, high-producing dairy cows tend to show slightly higher false-positive rates of 7 to 8 percent, especially during periods of extremely hot weather. It is presumed that a portion of this variance is due to greater early embryonic death and not to the inaccuracy of the blood test. The tests cost between $2.40 to $4.00 per cow from the laboratory that processes and conducts the test, plus the cost of a sample tube and needle. Shipping expenses also must be added if the tests are not processed locally. A primary drawback of this method of pregnancy diagnosis is that results are not immediate. A producer must wait for the results to be sent from a laboratory before a diagnosis is confirmed. This period varies between 2 and 5 days depending on when the laboratory receives the samples.