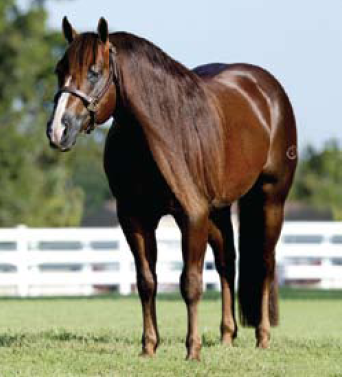 Magnum Chic Dream is powered by Thomas Moore horse feed and we couldn’t be prouder of this horse and all his achievements!

One for the Ages

Magnum Chic Dream has stood the test of time, siring champions for riders of all levels.
By Kelsey Pecsek

When Viola Scott purchased Magnum Chic Dream in 1998, she was looking for a colt to geld and show in the Non-Pro. The 1996 sorrel stallion turned out to be a little more than she bargained for, but it was the start of something truly incredible.

“We never intended to stand him at stud,” Scott said. “He had such a great disposition and such a good mind that his trainer, Patti
Brownshadel, thought I could show him as a stallion. Sure enough, I showed him and enjoyed it.”

Nearly two decades later, Scott and her husband, Jack Scott, are living the dream as stallion owners. They live in Sherman, Texas, less than 20 miles from Magnum Chic Dream’s home at Casey and Kathy Hinton’s Cedar Ridge Stallion Station in Whitesboro, Texas, so they visit him often. And while they enjoy one-on-one time with their oncein-a-lifetime horse, “Magnum” is climbing through the ranks among reining sires. This year, he earned his distinction as an Equi-Stat Elite $3 Million Sire and jumped into the top 10 sires in the Equi-Stat Lifetime Reining Statistics.

In 1999, Magnum (Smart Chic Olena x Sailin Barbee x Topsail Cody) debuted as a 3-year-old with Brownshadel in the saddle. The duo qualified for the Open finals at the National Reining Horse Association (NRHA) Futurity and finished as Limited Open Reserve Champions. At the 2000 NRHA Derby, they tied for second in the Intermediate Open.

Scott took Magnum into the show pen for the first time during his 5-year-old season. The duo went on to win $1,609 together, but in 2004, Scott made the decision to retire from the arena.

With four foal crops already on the ground, Magnum was geared up to become a full-time breeding stallion, but Casey Hinton wasn’t quite ready to see the horse retire. Troy Heikes had unintentionally qualified Magnum for the American Quarter Horse Association (AQHA) World Show at a January show in Denver when he was schooling the stallion for Scott.

“He qualified him in one show, but we were not planning to take him to the World Show at all,” Scott said. “But Casey wanted to put him in front of a different audience – just Quarter Horse people – and since he was qualified, we thought we might as well.”

That haphazard decision turned out to be a great one. Magnum carried Hinton to the AQHA Senior Reining World Championship and $8,616, bringing his Equi-Stat record to $44,553. With that achievement came a permanent retirement from the show pen and a small surge of mare owners excited to breed to Magnum. Then in 2010 and 2011, he reached new heights when he sired 83 and 93 AQHA-registered foals, respectively.

“He hasn’t had all that many [foals], but the last six or seven breeding seasons have been spectacular. We have had some wonderful mares come to him,” Scott said. “He’s had some lovely, lovely ladies, and I am grateful beyond belief. God has just blessed us.”

One of the most notable aspects of Magnum’s offspring record is how evenly the earnings spread across divisions. A total of 188 Magnum foals have gone on to make more than $1.7 million in Open competition, while 149 have earned nearly $1.3 million in the Non-Pro.

“It’s not just the Open and Non-Pro, either,” Scott added. “He has champions in the United States and Europe, and in the Youth and Prime Time. In my opinion, he is a sire for all ages.”

Lil Magnum Jessie, out of the Lil Ruf Peppy mare Lil Ruf Jessie, is Magnum’s highest earner with $177,367 to his credit. The 2006 gelding was shown by Hinton to the 2009 NRHA Futurity Level 4 Open Reserve Championship. He is followed closely by Taris Dreamer (out of Taris San Cutter x Doc Tari), a 2009 gelding who amassed nearly all of his $174,841 Equi-Stat record in the Non- Pro with owner Ron Thompson.

Thompson has piloted four Magnum offspring to $260,159 in earnings, including $2,455 in reined cow horse money, and Hinton comes in at No. 2 after garnering $200,480 on 12 of the stallion’s foals. Three other riders – Josh Visser, Casey Deary and Jordan Larson – have also pocketed more than $100,000 each on horses by Magnum.

“He has the best disposition of any horse I’ve ever owned. We have a bunch of people that have written wonderful letters to us extolling Magnum’s virtues,” Scott said. “We have enjoyed these years, and watching his babies perform is great fun for us.”

As of June 30, Magnum’s offspring record totaled more than $3.1 million and ranked him ninth among sires on the Equi-Stat Lifetime Reining Statistics. By mid-October, he had 245 money-earning offspring, with 18 of those coming of competition age this year. With Magnum’s breeding career still thriving, it seems Scott will have many more years to watch the legacy unfold.

“As long as he’s happy making babies, that’s what he’ll do. And when he’s done, he will live out his life,” Scott said. “We have thoroughly enjoyed our little fella. He’s a good boy, and I just love him to pieces.”