Transitioning Horses from Turnout to Stalling 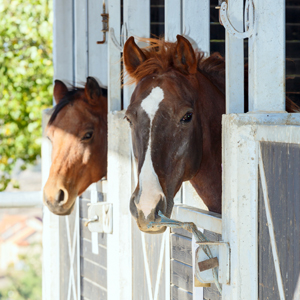 Proper management is important for horses that have some time off from work and are being brought back into a training program. As these horses are transitioned from full pasture turnout to a schedule that includes many hours in the stall each day, their diet and exercise level will both change. The risk of impaction colic increases in horses that have recently been moved from pastures to stalls. To keep their horses healthy during the transition, owners will need to take these changes into account.

A study conducted in England used seven horses from the time they were on full turnout through their transition to stalling, hay, and an exercise program. The horses were first monitored while they were pastured. The researchers measured daily water intake, fecal output, fecal moisture, and gut motility for each horse. The horses were then moved to stalls, fed grass hay, and put on a twice-daily exercise routine. During the next two weeks, average water consumption almost tripled, but water content of the manure dropped significantly. Gut motility also decreased during the first five days of stalling.

While none of the study horses developed colic, results showed that horses moving from pasture to stalling must adapt to considerable changes that may lead to impaction colic. Hay contains much less water than grass; pastured horses tend to nibble forage all day, while stalled horses often go for long periods without anything to eat; and hours of standing in the stall are different from exercising freely in the pasture, even when two daily exercise periods are scheduled.

The observed decrease in gut motility indicates that horses have some difficulty in adapting to these sudden changes in management. Dr. Bryan Waldridge, staff veterinarian at Kentucky Equine Research, offers these suggestions. To give the horse the best chance of avoiding colic from gut impaction, owners should take several days to accomplish this transition, gradually increasing stall time rather than making a sudden change. During the first week or so, horses should be watched as they spend more time in the stable. Owners need to be alert for any sign that the horse is developing a problem related to the gastrointestinal system. These signs could include lowered manure production, manure that is drier than usual, disinterest in hay or feed, and indications of abdominal discomfort.