Research and ranch experience has shown 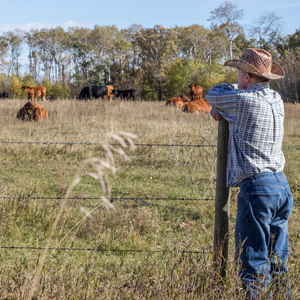 that the management procedure of feeding pregnant cows late in the day (or even better in the evening) has decreased the percentage of cows calving during the middle of the night. The percentage of adult mature cows that need assistance at calving is extremely low compared to the percentage of first calf heifers. Therefore, the heifers, of course, are the group of females that are of greatest need of observation during the calving season. On many large ranches, it is physically impossible to feed all of the cows after 5:00 pm. In those instances, the ranch manager should plan to feed the mature cows earlier in the day, then feed the first calf heifers at dusk.

What about the situation where large round bales of hay are being fed to the cows and heifers? If the cows have unrestricted access to the hay around the clock, then the best method of influencing the time of calving is via the time of day that the supplement is being fed. At Oklahoma State University, the switch from supplement feeding in daytime to late afternoon/early evening feeding encouraged 72% of the cows to calve between 6 AM and 6 PM. These cows had 24/7 access to large round bales of grass hay. Before the change was made, when supplement was fed during the morning hours, the ratio of night time versus day time calving was nearly even, with half of the calves born at night and half during the day.

Some ranchers (usually with small herds) have reported success controlling access to the large round bales. The hay is fed within a small enclosed pasture or lot near a larger pasture where the cows graze during the day. In the evening, the gate to the area where the hay is placed is opened and the cows are allowed to enter and consume hay during the night. The next morning, they are moved back to the daytime pasture to graze until the following evening. In this manner, the nighttime feeding is accomplished with hay or silage only.

Whatever method fits your operation should be utilized. The advantages of heifers/cows being observed with daylight during calving is obvious. Also during winter months, baby calves born in the warmer part of the day with radiant heat from the sun to reduce cold stress, have a better chance for early colostrum consumption and therefore survival.