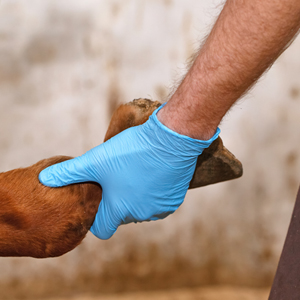 Degenerative joint disease in horses involves synovial inflammation, erosion of cartilage, and changes in the layers of bone under cartilage layers. Causes may be related to sudden or cumulative mechanical stress leading to the release of inflammatory enzymes. Tissue damage from free radicals is also a suspected cause.

Horses with this condition show joint pain and lameness that are often severe enough to end performance careers. Treatment with corticosteroids and other anti-inflammatory medications can reduce discomfort, but these substances may have undesirable side effects. Extracts of various plants and marine animals such as the green-lipped mussel have also been used.

A study conducted at Auburn University and reported in Journal of Equine Veterinary Science evaluated the use of a preparation of c-phycocyanin, a pigment derived from blue-green algae, in treating degenerative joint disease. C-phycocyanin has been shown to have anti-inflammatory and antioxidant properties while avoiding undesirable effects associated with some other medications. Anecdotal evidence of decreased pain or improved gait has been seen after humans, dogs, and horses with osteoarthritis were treated with c-phycocyanin.

The current study used 41 horses that had been diagnosed with lameness caused by degenerative joint disease. Horses were aged 3 to 20 years old and were used for western horsemanship, reining, equitation, and jumping. Breeds included stock-type, Thoroughbred, and Warmblood-type. Lameness was identified in fetlocks, stifles, and other limb joints. Researchers evaluated all horses for degree of lameness at the beginning of the study.

They divided the horses into two groups, with horses in one group receiving a commercial preparation containing c-phycocyanin and horses in the other group receiving a placebo of similar weight, volume, and texture. The dose was adjusted so that larger horses received an appropriately larger amount than smaller horses for the first six weeks of treatment, after which all horses received reduced maintenance doses. The researchers mixed the substance into feed with added molasses and water. Some horses were treated with joint injections of corticosteroids to reduce lameness and allow the horses to continue participation in competitions. All horses were evaluated for lameness at intervals throughout the year-long study.

There was no statistically significant improvement in lameness score for any of the horses regardless of treatment. However, there was a trend toward perceived improvement in treated horses. Also, horses in the treatment group were able to go for longer periods between intra-articular corticosteroid injections than they had before treatment. This result was not found in horses in the placebo group. This finding suggests that the use of c-phycocyanin might have been part of a synergistic response, a theory that could be investigated through further research.