Increasing income from calves sold at your local livestock market 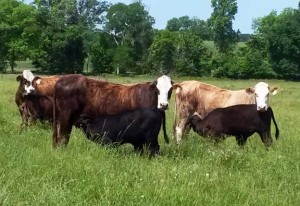 While cattle producers have always worked hard to minimize input costs of their operation, there are also management practices that can increase the income from calves sold at your local livestock market. The weight and quality of calves can make a significant difference in the price buyers are willing to pay for your calves. There are several factors that affect the value of a calf: age, nutrition, management, and genetics. Since the genetics of calves is influenced by the quality of the parents, this article will focus on tips for managing calves currently on the ranch. Calf age is the simplest method to manage the value of calves sold. As a general rule, older calves weigh more. If a local producer had sold a fall born steer calf that weighed 300 pounds in April 2014, it would have sold for around $ 2.60 per pound for a total of $ 780. However if you had kept this calf on the cow, with an average daily gain of 1.75 lbs/day, it would have weighed 500 pounds in early August, and would have sold for $ 2.44 per pound for a total of $ 1,200. Granted last year’s calf prices were somewhat unusual. Normally cattle prices are at their peak for the year in the spring, but drop some and then hold fairly strong through the summer months. The question to consider then is, can you add 200 pounds to a calf for less than $ 440? Since the bulk of this gain takes place when pastures are in peak production, it normally does pay to wait and sell older calves later in the summer.

The next factor that affects a calf’s weight is nutrition. High quality grazing helps the cow produce more milk, but is also a large part of the diet of older calves. Pasture grasses are of the highest quality of the year in spring and early summer, especially when they have been fertilized. Later in the summer forage quality starts to decline, so older calves benefit from protein supplementation. This practice, commonly called creep feeding, can provide a boost to weaning weights. Dr. Bill Kunkle and several county agents did a research study of calves on seven Florida Ranches that showed the value of creep feeding. The goal of the study was to provide calves one pound/head/day of cottonseed meal (CSM) the last 60 days prior to weaning. They utilized salt to limit consumption in creep feeders (92% CSM, 8% salt). Over the six years of the study, the calves consumed an average of only 0.64 lbs of cottonseed meal/head/day and gained an extra 0.27 lbs per day more than calves that did not creep feed. In summary, creep fed calves gained an extra 16 pounds from eating 38 pounds of cottonseed meal.   At the current rate of $ 300 ton for cottonseed meal or $ 0.15 per pound you could add 16 pounds to each calf for less than $ 6 per calf in creep feed.

Cattlemen have four management tools that can add value to the calves they sell: castration, implants, deworming, and minimizing shrinkage.  Bull calves will be castrated before entering feedyards.  The older bulls are at castration the higher the stress and the greater the risk of infection, so buyers discount bull calves when they purchase them. A simple comparison from last week’s market report shows the actual discounts that occurred.  Certainly with such a small sample other factors may have created price variation, but in general, buyers paid 4-11¢ less per pound for #1 bull calves as compared to steers.  The discount can fluctuate depending on the quantity of calves being sold each week, and the current demand for feeder calves.  However, avoiding a $ 40 discount by selling 500 pound steer calves instead of bulls adds more income than the added labor costs of castration.

Growth implants can add 15-20 pounds of extra weight at weaning for around $ 1.30 per implant. In today’s market, that provides a return of $ 31 for every $ 1 spent on implants. They do, however, need to be used correctly.  A study of 7 feedlots with over 2,500 head found that almost 1/3 of the implants were not being used correctly. In this study the main problem was that the ear got infected. In some cases the implant was not properly inserted in the ear. Once the work crews were re-trained, there was less than 10% that had problems. The point is to make sure the implants go in clean and in the right location. One implant given to calves at 3-4 months of age can add 17 extra pounds at weaning. Controlling internal parasites, particularly stomach worms, can also add weight to calves at weaning. A University of Florida study of 537 head in three locations, showed that de-worming calves provided a $ 6 return for every dollar invested. De-worming added 8.7 pounds to each calf over a 90 day period.

The other management tool, often overlooked, is shrinkage (aka shrink) or weight loss due to stress. Calves start losing weight as soon as they are separated from their mothers, so the quicker they get from the pasture to the scale at the auction the better. Calves lose 1% of their body weight per hour for the first four hours, and then 1/4% per hour for the next 8-10 hours. Unlike cull cows and bulls that will eat hay at the market the night before a sale, weaned calves will simply ball, pace, and loose weight.  A study in North Dakota shows the difference in heifer calves that were weaned and sold the day of the sale, versus those weaned the day before the sale, and sold the following day. Using the same market information as our earlier example from last August, those heifers would have sold for $ 2.20/pound. So, the heifers weaned and sold the day of the sale would have been worth $ 31 more than those weaned and sold the next day. The only difference was the stress and time delay between weaning and the point the calves were weighed before sale.   Stress makes cattle lose weight, so anything producers can do to reduce delays before selling, overcrowding on a trailer, limited access to water, rough handling, and working in the heat of the day, can reduce shrinkage before calves are sold.

The weight and quality of each calf dictates their market value. Selling older calves, castrated steers, creep feeding, deworming and implanting, and managing shrinkage will provide additional income from each weaned calf sold through the market.