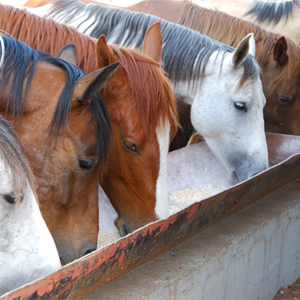 Despite the fact that horses evolved as near perpetual grazers, modern management practices in many areas of the world involve stabling and feeding horses only a few times per day. But how many meals should they be fed? What should those meals consist of? And what impact does being fed meals rather than being able to graze freely have on a horse’s health?

“We know that mature, idle horses that are fed diets high in nonstructural carbohydrates, which are sugars and starches, can have an increased risk of colic and insulin resistance. This means that a horse’s body becomes less sensitive to the effects of insulin, and they must produce more and more insulin to effectively control blood sugar levels,” explains Kathleen Crandell, Ph.D., equine nutritionist at Kentucky Equine Research.

To better assess how a horse’s body responds to meals with either high (43%) or low (18%) levels of nonstructural carbohydrates (NSC), a research team* from North Carolina State University led by Shannon Pratt-Phillips, Ph.D., fed eight mature, idle geldings one of four diets: a high-NSC concentrate in either two or three meals or a diet low-NSC concentrate either two or three times per day. All horses were fed a total of 0.5% of their body weight in concentrates, which means that if they were only fed two meals daily, each of those meals was bigger than if the horses were fed three meals daily. After seven days of each diet, insulin levels in blood were measured.

The study authors found that horses fed high-NSC meals two times per day had higher resting insulin levels than horses fed low-NSC meals or fed thrice daily. It was also noted that NSC content of the concentrate had a bigger impact on other insulin measures than did number of meals.

According to the researchers, horses at risk of developing insulin resistance, equine metabolic syndrome, and laminitis would benefit from decreasing the concentration of nonstructural carbohydrates and potentially by decreasing meal size and consumption rate.