Saddle Fit and Back Pain in Horses and Riders 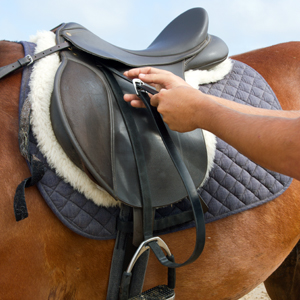 A saddle that doesn’t fit can make the horse’s back sore, but can also cause back pain in riders, according to a study conducted by British researchers at the Animal Health Trust Centre for Equine Studies.

Information was gathered by observing and assessing horses being ridden in various disciplines. The horses were thought to be sound and were in regular exercise programs. Asymmetries of the back were assessed and any signs of lameness were noted.

Later, the same riders were asked to answer an online questionnaire about lameness, saddle slip, and their own and their horses’ back problems. More than 200 riders responded to the questionnaire.

The visual assessment showed that 43% of horses had saddles that fitted poorly. About 14% of the horses showed saddle slip as they were ridden, and this change in saddle position was significantly associated with hindlimb lameness or other abnormalities in the horses’ gaits.

Among the riders, 38% reported back pain. This was associated with riding horses that showed some signs of pain while being ridden and those that had poorly fitting saddles as determined by the visual assessment. Riders who were judged to be sitting in a crooked position were also more likely to report back pain, although it is not clear whether their position was the cause or result of discomfort. When expert riders were in the saddle, horses were less likely to show back asymmetry than when they were ridden by riders with less expertise.

Riders who reported frequent saddle fit checks were more likely to have saddles that did fit their horses well, though 30% of saddles that were checked at least once a year still did not fit properly. Because body shape changes as horses grow and become more muscular and fit, saddles should be checked for fit on a regular basis. It is also suggested that horse owners, trainers, and riders should make an effort to find out more about checking the fit of their saddles and recognizing signs indicating poorly fitted saddles. Recognizing the links between back pain, rider straightness, saddle slip, and hindlimb lameness could help riders and horses correct problems and avoid discomfort.