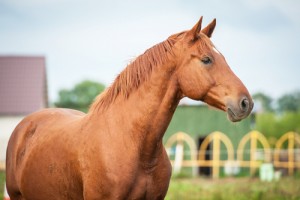 Feeding each stallion as an individual is important. The stallion’s book (number of mares served during the breeding season), age, behavior, body condition, general health, handling routine, and level of free or forced exercise all impact how he should be fed.

Kentucky Equine Research nutritionist Clarissa Brown-Douglas, Ph.D., pointed out that most people overestimate the energy requirements of stallions, and as a result, many stallions are overweight. Fat stallions have an increased risk for developing insulin resistance and laminitis. An overweight stallion has to work harder as he serves mares and may burn out if he has a heavy breeding schedule.

Stallions should not be too thin, however, and should enter the breeding season in a moderate to fleshy body condition of around 6 to 7 (3+ Aus), Brown-Douglas said. When a stallion is in this condition, his ribs will be palpable, though not visible as there will be a layer of fat over them.

A sound feeding program for stallions should be built around good-quality forage fed at a daily rate of 1-1.5% body weight. A fortified concentrate should be added to balance the ration. Most stallions can be maintained on performance horse feed or those designed for breeding horses. Stallions that need to gain weight and very active stallions may benefit from concentrates containing supplemental fat. A balancer pellet may be a better choice than grain for overweight stallions.

During the off-season, many nonworking stallions can be maintained almost entirely on good-quality hay or pasture plus a vitamin and mineral supplement. Fertility issues are often not nutrition-related, but optimum fertility can be supported by correct nutrition and targeted supplementation with specific vitamins, minerals, antioxidants, and omega-3 (long-chain) fatty acids.

Selenium is important for testicular function. It is a component of the antioxidant glutathione peroxidase, and is also required for testosterone production. Selenium has a relatively narrow range between the daily requirement and toxicity levels, with stallions requiring approximately 3 mg/d. Insufficient dietary selenium can lead to lower fertility because of poor chromatin condensation in the horse’s DNA.

The reproductive organs are susceptible to free-radical or oxidative damage because they contain large amounts of fatty acids in their cell membranes. Fertilization is highly dependent on membrane integrity, so healthy antioxidant defense is vital. Supplementation with natural-source vitamin E such as that found in Nano-E has resulted in increased total sperm output, concentration, and motility in other species as well as reduced DNA fragmentation, according to Brown-Douglas.

Trace minerals are vital for male fertility. Zinc is important for testosterone production and secretion, spermatogenesis, and sperm motility. Copper is linked to libido and semen quality.

Semen contains a large amount of fatty acids, mainly omega-3s and omega-6s. These components are important in sperm motility, sensitivity to cold shock, and fertilization capacity. Stallions supplementedwith the omega-3 fatty acids found in EO-3 have shown increases in total motility, progressive motility, and rapid motility of sperm. These changes were most evident in semen that had been cooled and stored for 48 hours. Other results were sperm concentrations that were almost doubled in supplemented stallions, and better sperm motility in frozen-thawed semen.