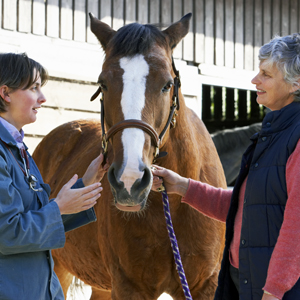 Your Thoroughbred event horse has started to make an odd noise when he inhales during exercise. You mention this to your friend who has a horse in race training, and he says it’s not uncommon for horses to have some sort of blockage in the windpipe. “Paralyzed flaps or something,” he thinks. You have your veterinarian examine the horse’s throat, and it looks perfectly normal. Next time you gallop him, he sounds worse. What do you do now?

A roaring noise as the horse inhales during strenuous exercise is often caused when the arytenoid cartilage isn’t pulled far enough out of the way to open the trachea, blocking free passage of air. Horses that are severely affected become unable to perform well because they can’t take in enough air as they breathe. There are two arytenoids cartilages, left and right, and paralysis is almost always on the left. This defect is found most often in Thoroughbred and Standardbred horses, and there is some evidence that the problem is hereditary. Veterinarians examining a standing horse usually won’t see any abnormality, and for this reason diagnosis is often made with an endoscope while the horse is exercising and the blockage is easier to observe.

According to Kentucky Equine Research staff veterinarian Dr. Bryan Waldridge, this condition usually doesn’t improve on its own and often gets worse unless it is treated. Traditionally, “tie-back” surgery was performed to pull the cartilage out of the way and suture it in an open position. Initial success was sometimes followed by partial closure when the cartilage sagged or tore loose from its restraint. A slightly different procedure, the modified tie-back, seems to give good results that last longer. A quicker treatment involves snipping away part of the cartilage. Nerve grafts are also being tried as a means of restoring movement to the paralyzed flap. No technique is guaranteed to give perfect results in every horse, and complications of surgery may include infection or damage to other throat structures. However, many horses can return to previous levels of performance after some type of tie-back procedure.

Owners who notice noisy breathing and a drop in exercise tolerance should check with a veterinarian who is able to arrange an endoscopic examination as the horse is exercising. Not every case of respiratory noise is caused by paralyzed arytenoid cartilage, and treatment will depend on the specific problem and its severity.